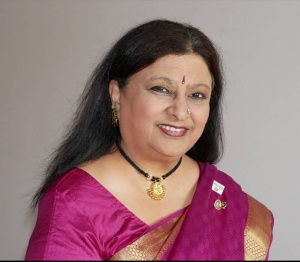 Aruna Koushik is a passionate, strong and determined woman who has carved a niche for herself in the area of Human Rights, Mediation and Women’s empowerment.

Her background reveals a strong mosaic of cultural heritages. In Pune she volunteered her summers in the slums with the Sisters of Charity and was overwhelmed by the kindness and dedication of Sister Teresa.  Her other mentor was her dance Guru Smt. Sucheta Bai Joshi.   She completed her Masters at TISS in Mumbai.  She and her husband Shiva immigrated to Canada in 1982

Aruna Koushik has a 35-year career as a Mediator and Human Rights Consultant and is President of her private practice Shivenko Consulting of LaSalle, Ontario, Canada.   She is the chief architect of the Office of Mediation for Windsor Regional Hospital assisting in resolving conflicts in the workplace.  She is engaged widely in the community and is actively involved with the Multicultural Council of Windsor and Essex County that promotes the settlement of refugees and immigrants in the City and County.

A Rotarian since 2001, Aruna and her husband Shiva have been engaged in eradicating Polio and have organized eight NID’s to India, Pakistan, Afghanistan and Nigeria.  Aruna was a Group Study Exchange team leader to the Netherlands in 2007 and enjoyed her interactions with Rotarians in the Netherlands.  She and her husband, Shiva, are active in instituting several projects in the areas of Water, Maternal & New Born Health, General Health, Food & Nutrition and Literacy etc.  They are one of the chief architects for Sky dive for Polio, which has raised over $75,000 so far with the Bill and Melinda Gates match.

Aruna was recently chosen as the first recipient of the YMCA Woman of Excellence in Social Justice 2021.  Her other honours include: The Women of the Year, the Athena Award , Herb Gray Harmony Award , the Queens Golden Jubilee Medal for Volunteer work and the YMCA Peace Medal among other honours.  She is a Foundation Benefactor, Bequest Society member and a Major Donor and has received the Citation for A Polio Free World that is awarded to just 10 Rotarians around the world.  In addition, she is a trained Bharat Natyam dancer who has pivoted to the role of “Guru” of her classical dance school Nupur Jhankar in Windsor which recently celebrated 35 years. Her greatest joy are her four grandchildren Senthil, Vedan, Anaya and Aria.

You and I are brother and sister of the same mother…Mother Earth.

We cup our hands to give. With love, with joy and a full heart.

Let’s give to change the world.